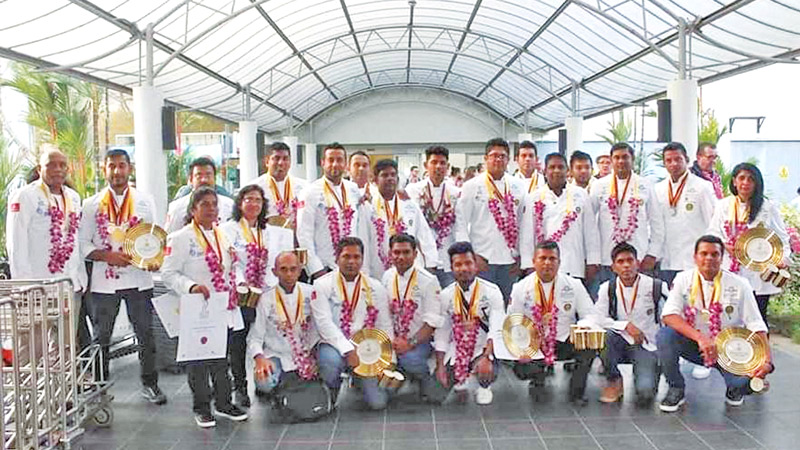 Sri Lanka won the highest number of medals ever in the IKA Culinary Olympics, when they were awarded 26 Gold Medals, 22 Silver Medals and 8 Bronze Medals in the competition. There was an Entry Gold with Excellence as well. Team Sri Lanka was initiated by Chefs Guild of Lanka, who undertook the entire coordination for the whole tour. A total of 28 local chefs, including four lady chefs plus four officials for the event participated in the Olympics. Chef Gerard Mendis also had the distinction of being on the panel of judges.The IKA Culinary Olympics is the international culinary festival par excellence. Over 2,000 cooks from around 60 nations participated in Stuttgart from 14 to 19 February and prepared food and presented same within a given timeframe in the respective categories for the Olympic title. About 25,000 visitors were present to see the spectacle at the ‘Messe Stuttgart’ in Germany. The Stuttgart venue was transformed into the gastronomic highlight of the 2020 world culinary calendar. The competition was in conjunction with ‘Integastra’ the food expo.

The IKA Culinary Olympics is the most renowned and important international culinary competition for chefs. It is a great opportunity for Sri Lanka’s participating chefs and pastry chefs to represent their country and their profession. Each individual participant, all passionate about their work, showed enormous talent and potential during this world culinary competition. Culinary Olympics Team Sri Lanka convinced the jury of its skills due to its precision and artistic craftsmanship. Sri Lanka has taken part in this competition since 2012 and won several medals for the country.

The Culinary Olympics is a Mecca for chefs, industry partners, gourmets and hobby chefs. For four days they could actually witness the top elite of the world wide chefs’ network, do their best to satisfy the palettes of judges and guests alike.

“It’s certainly an extraordinary moment for Team Sri Lanka. We were better than ever before and fulfilled our dream of winning big this time,” said Chefs Guild Lanka Chairman Chef Gerard Mendis, the pioneer who won a Gold medal at the Culinary Olympics in 1988. He also summed up the IKA Culinary Olympics 2020 experience, saying.

“It is an intense competition for which chefs take long to prepare. They don’t just rehearse making the food; they also have to prepare themselves for the frenetic environment, which spectators describe as akin to a soccer stadium, with cheering from each country’s cheering section. Throughout the ceremony, the name ‘Sri Lanka’ echoed across the hall as the county secured a record number of awards.”