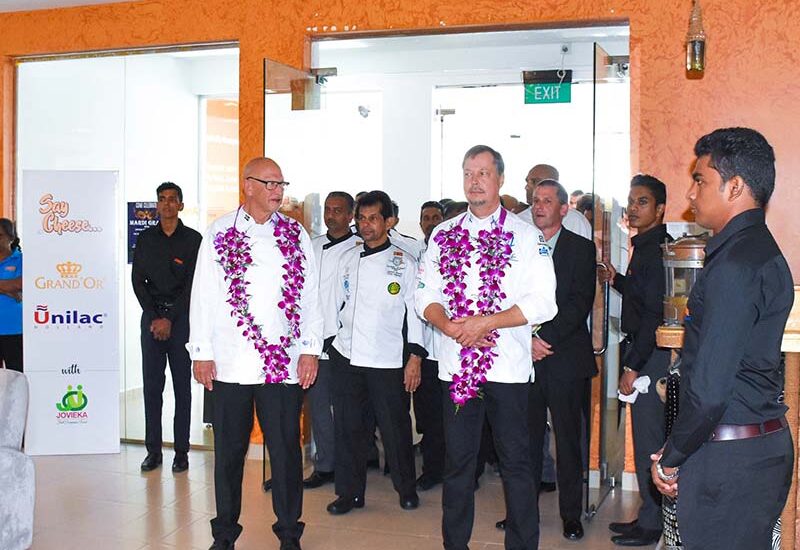 The two Master Chefs have come down to Sri Lanka upon invitation from the Chairman of the Chefs Guild of Lanka, Chef Gerard Mendis. The opportunity to hold the event was given to WAISL at Sri Lanka Institute of Information Technology, Malabe. The Young Chef’s Club of Lanka would also like to thank Mr. Rohan Fernandopulle, General Manager, and Chef Buddhika Samarasekera, Executive Chef, of Water’s Edge Hotel for their assistance in providing the rare equipment and ingredients to the Master Chefs.

The young students of WAISL helped the Young Chef’s Club of Lanka to provide a Professional Workshop environment in a Training Institution as one would have experienced in a large star classed hotel.

The Master Chefs, Chef Gert Klotzke and Chef Tapio Laine presented to the Chefs a Workshop of how World Class Culinary (Food) Competitions are to be looked at in order to get the highest points possible and the Chefs took in with much focus and attention the information that was provided to them during the workshop.

The Workshop also brought about the opportunity to present to the Master Chefs the LIFETIME HONORARY MEMBERSHIP to Chef Klotzke and Chef Laine and with much surprise and pleasure to the Staff and students of WAISL, the honor was extended to the CEO of WAISL Mr. Steven Bradie-Miles and he is now the first CEO of a Hospitality Management Institution to hold this Honorary Title here in Sri Lanka.

It was also a proud moment for the WAISL to be able to present to the Master Chefs and the audience of Executive Chefs the first batch of Commercial Cookery Students who had just started on the 16th of October 2017.

The Mentor of the The Young Chef’s Club of Lanka – Chef Kapila Jayanetti (Academic Head of Culinary and Senior Lecturer at WAISL was in-charge of the organizing and facilitating the event from start to finish and his leadership of his team of experienced Chefs Trainers – Chef Samantha Surene, Culinary Specialist at WAISL and Editor of the Young Chef’s Club of Lanka; Chef Harsha Alahakoon and Chef Gayan De Silva, Culinary Teachers at WAISL.

The participants received a very rare opportunity into the ideas and methodology of the Chairman of the WACS Culinary Competition Committee and the hands on skill of the trainer of the Finnish Culinary Olympics Teams.